Now where to start with the story of Lilian, Aunt Lily and Nana ! She is named as Miss Lily Baty in the list of mourners at her Grandmothers funeral in 1917.

Lilian May was born 1898, in Wark Parish she met George Fairbrother at a WW1 training camp called “Brocton” at Cannock Chase, Staffordshire. Lilian was in the Queen Mary Auxillary Army Corps as a cook.  Her Granddaughter, Jane was given a cookery book belonging to Lilian by her cousin Anne, it had come from the family house in Birtley.  Dated 1908, when she was still a child, Lilian has written inside the front cover:

and inside the back cover:

The book is called  “Up to date and Economical Cookery”  by Dora Groome.

Lilian and George married in 1919, at the end of the War, George signed up again to join the Occupying Forces, terminating his Army career in 1920. There are complete records of George’s Army Service, he joined the Warwickshire Regiment in 1901, then the Lincolns in 1902, discharged in 1910. He joined the A.S.C in March 1915, served in Greece and Turkey, working with the horses. In 1917 he contracted Malaria and was returned to the UK, with a notation of not being put in a theatre of war other than in France or Italy. 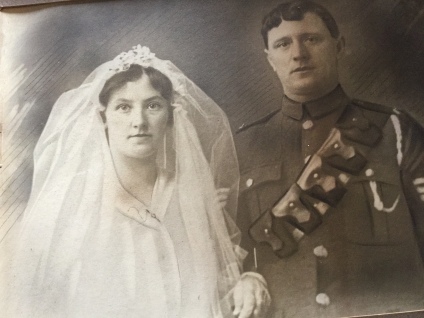 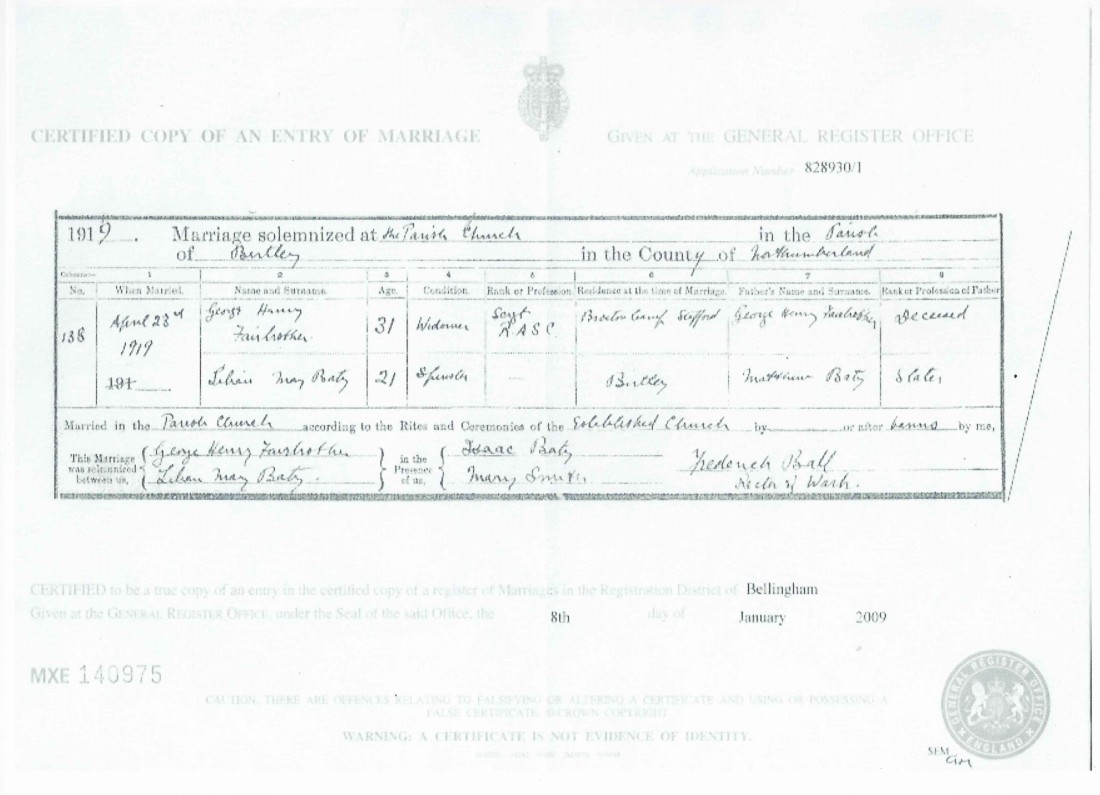 George was born 1884 in Coventry, looks as if he forgot this when he married Lily in 1919, or someone made an error !

He was a widower, his first wife Martha Checkley died in 1915, having born twins who died not long after birth and then two sons, George and John.

There is a mystery photo in the Fairbrother family, two young boys very close in age, the fold of the photograph gives the impression of having been in a pocket or wallet, could they be his two sons ? After Martha’s death, the boys went to live with her family in Yorkshire. They did not live with Lillian and George, although Lilian told her daughter, Isabel May that she had met them.

Maybe a reader of this website can confirm if this is the case.

This link is to George’s War Record, the copy is of poor quality, he signed up on the 12th March 1915, George Fairbother

Tattooed forearms and a scar above his eye !

Winnie, Thompson and May

Emma, her mother, died in 1926 and Isabel then nine years old, became part of the Fairbrother family. 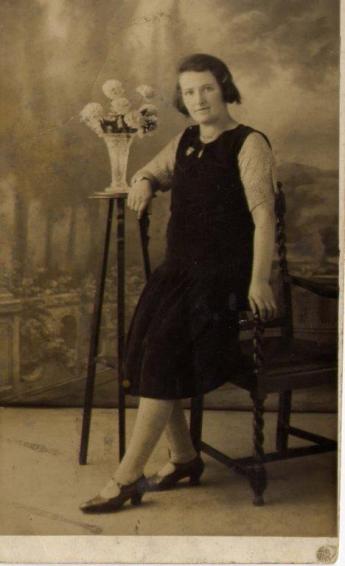 The header photo of the website, the gold and aquamarine bar brooch, was given to Lily by her father on her 21st Birthday

Jane is now the proud owner and recently took it to a specialist to have it dated, it is from 1900 to 1910, maybe it was a previously loved item in the family.

Lily, with most likely her son, Thompson

Sadly, George died in 1934, leaving Lily with four young children, according to the 1939 Register, she and Isobel May were in Domestic Service for a Major Charles Hornby and his family, at Anick Cottage, Acomb, not really a cottage as there were between 11 and 15 people there including family and staff. Her family knew she worked for an important man, Major Hornby was certainly that !

In 1936, Lily made the Wedding cake for Major Hornby’s daughter, Pamela, here is a link to the Enderby family which takes in some of her father’s history: Pamela Enderby and a link to the decorated Samuel Enderby Colonel Samuel Enderby, CVO DSO MC JP

Along the way she worked at Chipchase Castle and as Housekeeper for William (Billy) March.

Gloria Milburn and her mother, Dorothy Smith, Ossie Smith’s widow have stated that Lily and her four children lived at the far end of the village, later moving nearer the centre and running a shop.

1946 at the marriage of her daughter, Isobel May to Lionel Ellis in Birtley.

From left to right: 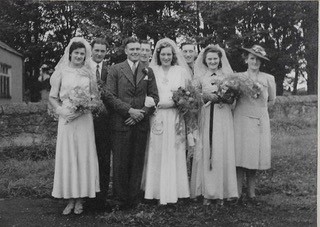 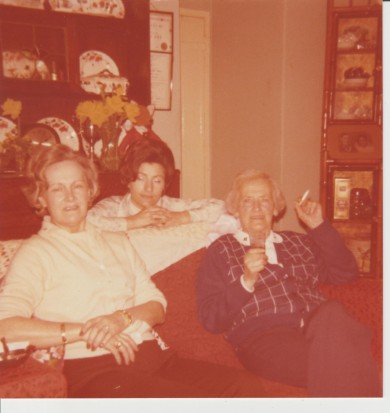 This photo was taken with a Polaroid in 1976 by Paul at Lily’s home, to her left is her sister Isabel, it is the last time the two were together before Lily died in 1984.

She referred to her Woodbines as Tabs.

Hughie and Betty lived at Tyne Green Nurseries, Hexham where he grew prize winning Chrysanthemums. The flowers were sent to market at Covent Garden in London.

There was a little cottage next door to their house where Lilian lived.

When Hughie and Betty gave up the business, Lilian moved just along the road to a bungalow.

Pretty in pink at the wedding of her Granddaughter Jane Ellis to Chris Pett in 1978.

Lilian with her daughter, May Ellis

Written by Jane Pett, her Granddaughter

“My Nana, Lilian May Fairbrother first met William March a Butcher from Greenside Durham, when she looked after his ailing wife Dorothy at Prudhoe House. She subsequently died in the  February  of 1919. William and Dorothy had no children.

I believe it would have been around 1945 that Nana left her home in Birtley possibly with her youngest son Hughie and went to the then home of William March, “Crookhill”, Ovington as his housekeeper.  A position she held until he died in 1960.

There was no electricity (we would go up to bed with a candle) and no running water, and of course the outside privy. No bathroom, washing was done at the kitchen sink. There was a large black range on which Nana excelled at her cooking skills. A paraffin lamp provided lighting in the main living room.

As a child it always seemed to be a big old scary house, but really it only had two bedrooms, a living room, front parlour,  scullery and a pantry.

There were lots of outbuildings, including a Coach House and stables where Uncle Billy kept his racehorse.

There was a large field to the front of the house with many caravans.

William March was a Master Butcher as was his father before him and had a shop at Greenside.

My Dad used to say of him he made the best sausages, “Sausages as they should be made”, according to my Dad who considered himself a bit of an expert on good sausages, Uncle Billy’s were talked about long after he died.

Several years ago my cousin Chris (Fairbrother) and his wife went for a visit to see Crookhill, knocked on the door, the then current owners were more than happy to show them around the much changed and enlarged house. Gone was the old black range and a lovely open fire place made with the local stone.

When William March (we knew him as kids as Uncle Billy) died in 1960 he left Nana “Crookhill” as he said in his Will “for her kindness in leaving her home to look after me”.

Unfortunately for Nana, Billy had mortaged his home as he was a heavy gambler on the horses and so she had to sell up the property to pay back the loan, then left and lived in a small property at Tyne Green next to her youngest son Hughie and family.”

Her children and grandchildren 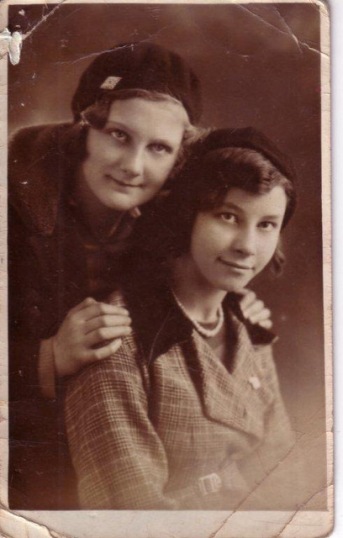 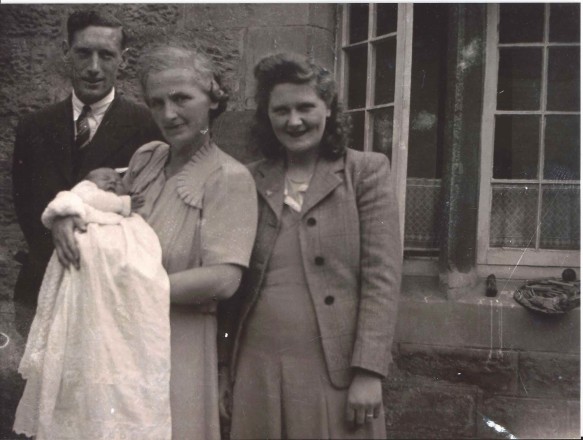 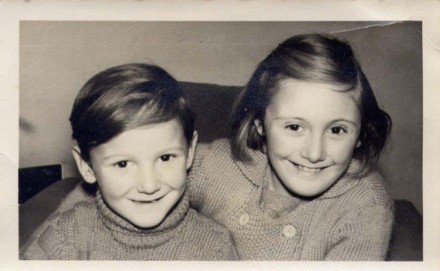 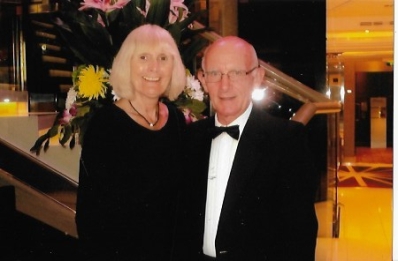 In the 1939 Register he is listed as a Cowman at the Short Moor Farm, situated between Chipchase and Birtley. 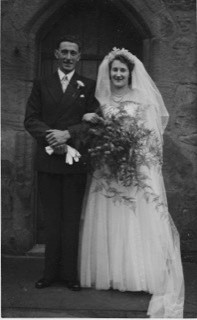 Thompson and Violet Fairbrother, 1951 – his best man was a Baty cousin

Thompson and Violet later divorced, he died in 1980.

Here is his son, Lilian’s Grandson, Christopher Fairbrother with his wife Daphne.

Isobel May Fairbrother born 1924 married Lionel Ellis in 1946, they had two children, Sandra and Jane. 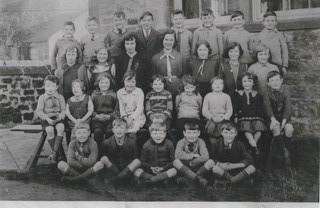 When Isobel May joined the school, the teacher declared there couldn’t be two Isobels, so from then on she became known as May.

May, her daughter Sandra with Billy March

The trousers were pink ! Much to the chagrin of Lionel, her husband, not the colour just the trousers !

In 1940 May joined her Aunt Isabel and her husband Neil MacDonald in Hampshire, meeting Lionel (Jim) Ellis when she was 17 years old. Four years passed before they met again.

May and Lionel Ellis, August 1946, Birtley

Lionel had his own story to tell of the war… as told by his daughter Jane.

“Lionel was born in Horndean, Hampshire the youngest of four children.

At the age of 7 the family moved to a small farm in Westbourne (where many years later he was to meet his future wife).

Lionel’s own family always referred to him as “Jim”, but May and his mother-in-law Lilian always kept to “Lionel”.

Lionel was conscripted into the second world war with the Army and served with the 21st Division 19th regiment of the Royal Artillery. He initially spent a lot of time in London and Kent on duty with anti aircraft guns and also served in Germany, France, Holland and Belgium.

Dad was involved with the D Day Landings at ‘Gold Beach’, he was also involved in “Operation Market Garden” in September 1944 attempting to take the Bridge at Arnhem in the Netherlands and continue into Germany. Unfortunately this operation was not successful and he lost many of his comrades in this battle.

In April 1945 his unit was involved in the liberation of the Concentration Camp Belson. ( He would not talk much about this afterwards as the scene was too horrific)

Dad finished his army career as a guard at the Nuremburg War Trials.

One story Dad did recall to me was in 1945 he had to spend several months in hospital in Hamburg, Germany, at that time an All Girl Swing Band led by Ivy Benson were invited to perform at the VE celebrations in Berlin at the request of “Monty” and on Christmas Day that year they performed live from Hamburg immediately after the Kings Speech. After that performance Ivy Benson and her band visited the hospital and Dad told us how she sat on the end of his bed and chatted to him.

Dad was a lifelong “Pompey” supporter-he saw them win the FA Cup at Wembley in 1939 and also again many years later, he would support them most Saturday afternoons at Fratton Park when they played home.”

May and Lionel set up ‘Ellesmere Nurseries’ in Westbourne, Hampshire.

At the wedding of their daughter, Jane to Chris Pett in 1978.

Later in life they enjoyed many cruise trips.

May and her beloved flowers……. 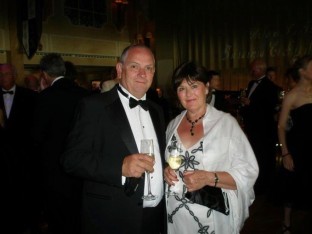 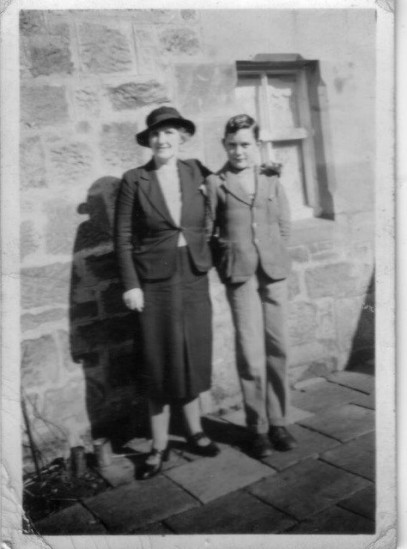 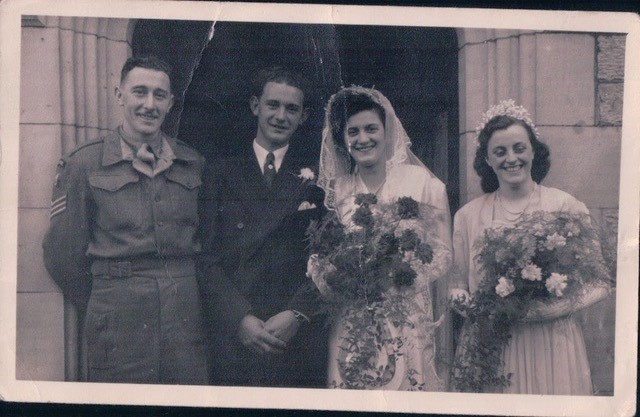